The $258 billion racketeering lawsuit accusing Elon Musk of running a pyramid scheme to back cryptocurrency Dogecoin has expanded, adding seven new investor plaintiffs and six new defendants, including his tunneling company Boring Co. According to An amended lawsuit filed in Manhattan federal court on Tuesday alleges that Musk, his electric car company Tesla Inc (TSLA.O), space tourism company SpaceX, Boring and others intentionally drove up the price of Dogecoin by more than 36,000% over two years, then let it crumble. In doing so, the defendants profited from tens of billions of dollars at the expense of other investors in Dogecoin, despite knowing all along that the currency lacked intrinsic value and that its value depended solely on marketing, according to the complaint.

Created in 2013 by software engineers Billy Markus and Jackson Palmer, dogecoin was an ironic response to the two internet phenomena of the year: cryptocurrencies, which multiplied in the wake of bitcoin, and montages of a photo of a Shiba Inu dog. very popular on the internet. The price of dogecoin has fluctuated by less than a cent for most of its history. But it has gone from a shadowy room to one of the most talked about digital assets between 2020 and 2021. 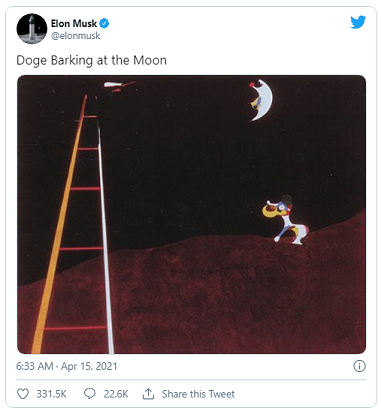 Musk has indicated that dogecoin is his favorite cryptocurrency. In February 2021, he called it The People’s Crypto, which reportedly helped push its price up.

Then in May, Musk was a guest on the Saturday Night Live (SNL) television show, an opportunity for the billionaire to discuss topics such as dogecoin, Tesla, but also SpaceX. In a skit during SNL, Musk played the role of a cryptocurrency expert wearing a bow tie in the show’s Weekend Update segment.

When asked what dogecoin is, Musk answered: It’s the future of money. It is an unstoppable financial vehicle that will take over the world. When a member of the show’s crew, Michael Che, retorted: So it’s a scam? , Musk replied, “Yeah, it’s a scam,” and laughed. This was no doubt a joke on the billionaire’s part, as the unconventional CEO posted numerous comments about cryptocurrencies on Twitter and criticized regular cash for having negative real interest rates.

That said, the prank had the effect of plunging the cost of dogecoin by around 12%.

An investor filed a complaint, quickly joined by other complainants. Accusations extend to other legal entities

Keith Johnson describes himself as an American citizen having been defrauded by a pyramid scheme around dogecoin set up by the accused. He asks that his complaint, filed with a New York court, be classified as a class action on behalf of investors who have suffered losses by betting on dogecoin since 2019.

The defendants knew since 2019 that Dogecoin had no value but promoted Dogecoin to profit from its exchanges, the complaint states. Musk used his pedestal as the richest man in the world to exploit and manipulate the Dogecoin pyramid scheme for profit, exposure and amusement.

The complaint also consolidates comments from Warren Buffett, Bill Gates and others questioning the value of cryptocurrency.

Johnson is seeking $86 billion in damages, representing the decline in Dogecoin’s market value since May 2021, and wants that amount to be tripled.

It also includes two companies run by the entrepreneur: electric vehicle maker Tesla for accepting dogecoin as payment for certain derivative products, and space company SpaceX for naming one of its satellites after dogecoin.

Indeed, Elon Musk announced in December 2021 that we could buy Tesla vehicles in Dogecoin. A month later, you could actually buy an electric children’s quad signed Tesla thanks to DOGE. Or even a belt buckle, a whistle and other small merchandising objects. On May 27, 2022, Elon Musk handed it over with his aerospace business; he announced on his Twitter account that the SpaceX store would also soon be open to payments in Dogecoin, stating: Tesla merchandising products can be purchased with DOGE, so will SpaceX soon.

Besides, he went further. When asked if we will be able to pay for subscriptions to his Starlink satellite Internet network in Dogecoin, Elon Musk answers (almost) in the affirmative: maybe one day

Keith Johnson equates dogecoin with a pyramid scheme, in that, according to the complaint, the virtual currency has no intrinsic value, produces nothing, is not based on any tangible assets, and the number of coins in circulation is unlimited.

He also wants to stop Musk and his companies from promoting Dogecoin and would like a judge to rule that trading Dogecoin is gambling under federal and New York law.

The complaint said the liquidation of Dogecoin began around the time Musk hosted NBC’s “Saturday Night Live” and, playing a fictional financial expert on a “Weekend Update” segment, called Dogecoin a scam.

The trial added several new plaintiffs as well as Elon Musk’s Boring Company and the Dogecoin Foundation, the non-profit organization behind the token itself, among the new defendants.

Dogecoin’s bearish situation is far from the only one. The cryptocurrency world is going through some rough times, with prices dropping to levels not seen since the end of 2020. The drop is likely due to several factors, including the general economic uncertainty seen in the stock market, inflation, panic caused by the massive sales of whales, etc.

It certainly didn’t help the cryptocurrency industry when London-based crypto bank Celsius Network announced a freeze on withdrawals, exchanges and transfers between accounts on Sunday evening.

In the hours following this announcement, the values ​​of other cryptocurrencies also fell: Bitcoin fell by 10%, Ethereum lost 19% of its value and Dogecoin lost almost 15% of its value, or approximately 0.01 $. As a whole, the total cryptocurrency market hovered below the symbolic mark of US$1 trillion, compared to US$3 trillion last November.

Cryptobanks like Celsius are modeled after traditional banks. They pool deposits of cryptocurrencies like bitcoin and offer loans and interest, often above 10%, to depositors. The problem is that these new players are not regulated and nothing protects depositors’ money. In addition, they are not subject to a minimum capital threshold in their reserves, unlike traditional financial institutions.

The cryptocurrency crash is part of a larger market crash. The S&P 500 stock index fell nearly 4% on Monday amid fears of a faster rise in interest rates from the Federal Reserve. High interest rates put downward pressure on all assets, including stocks and cryptocurrencies.

What do you think of this complaint? Do you think it has a chance of succeeding?

Do the claims seem legitimate to you?

What do you think of the $258 billion damages claim, which is three times the estimated decline in Dogecoin’s market value since May 2021? Reasonable, crazy or something else? Why ?