In an unprecedented way, SRA has just published graphs on its LinkedIn page showing the ranking of the most expensive makes and models of vehicles in terms of body repair. A list which was established from the expertise carried out over the whole of 2021. The graphs are based on a base of 100 equivalent to the average for the segment of vehicles under 6 years old with the highest frequencies (weighted to the representativeness of each model) for collision claims (traffic and parking), non-theft, vandalism, natural disasters and glass breakage.

As shown in the graphs below, the Renault Clio V remains the most expensive vehicle to repair in the segment. B (+ 15.7 % of segment average).

In the SUV-M2 segment, BMW X3 III tops the cost list (+29%). The first French Renault Koleos ranks twelfth for a lower repair cost than the average (- 2.6%).

In the SUV-H1 segmentMercedes GLS Coupé tops the cost list (+47%).

This list of the most expensive vehicles to repair is of course to be put into perspective with their share of accidents. If Tesla remains the second most expensive brand in repair (+ 61.1%), behind Porsche (+ 131.9%), it represents only 0.3% of expertise.

Renault, which accounts for 20.1% of appraisals, posted overall repair costs for its accident fleet of +3.4%. With 18% of appraisals, Peugeot remains within the average cost. 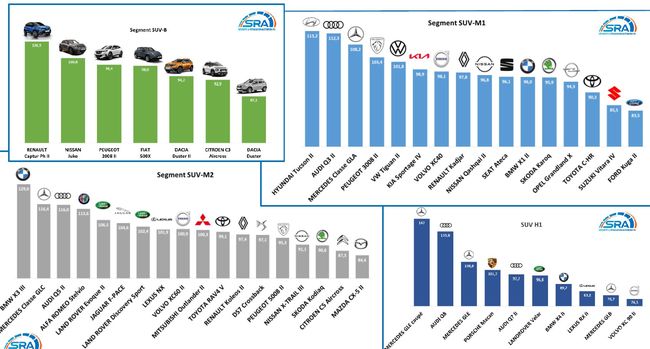