The legal showdown between Twitter and Elon Musk will finally begin on October 17 and last five days, according to a court timetable released this week. On July 8, Elon Musk, the boss of Tesla and SpaceX, unilaterally terminated the agreement to buy Twitter, on the grounds that the San Francisco-based company allegedly lied about the proportion of automated accounts and spam on its platform. . Twitter has decided to sue Musk to force him to conclude his acquisition for 44 billion dollars, and has chosen to accelerate the trial so that it takes place in September over four days.

Musk said he couldn’t move forward until Twitter revealed the true number of fake bot accounts on its platform. Twitter insists its bot statistics are legitimate. The boss of Tesla and SpaceX has tried to officially end the agreement without further ado by paying, for example, a billion dollar severance package, but this is not to Twitter’s taste. 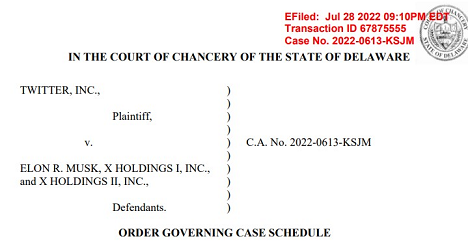 Twitter lawyers have filed a lawsuit in Delaware against the (currently) richest man in the world, seeking damages and more, and urged the judge to expedite the case and set a trial date for September. The hearing has now been officially set for Monday October 17-21. The legal teams representing both parties will need to finalize the documents and select the expert witnesses over the next few months.

Judge Kathaleen McCormick, Chancellor of the Delaware Court of Chancery, ordered the two parties to work together in good faith. But days before, Musk accused Twitter of trying to push the trial date back a week earlier, to October 10, and accused his lawyers of not cooperating. Twitter, however, denied those accusations and said Musk’s team hadn’t been much help either.

Twitter has repeatedly informed Musk that he has no objection to the trial starting on October 17 if the court has enough availability to carry out a five-day trial that week, provided only that Musk agrees not to not ask for more than five days of trial, the company reportedly said in the court’s findings. Twitter has agreed to start rolling out material if Musk does the same, the company continues. Musk is the party that is preventing productive and disciplined discussions of the scope of discovery by delaying the filing of a response.

Elon Musk is concerned that the Delaware Court of Chancery judge is handling Twitter’s lawsuit against him. Kathaleen McCormick, the court’s chancellor, or chief justice, has a no-frills reputation as well as the distinction of being one of the few jurists to ever order a reluctant buyer to complete a US corporate merger, US media note. .

Kathaleen McCormick took over the role of Chancellor or Chief Justice of the Court of Chancery last year, the first woman to hold the post. Last month, she was assigned the Twitter trial.

It already has a reputation for not supporting some of the worst behavior we see in these areas when people want to walk away from deals,” said Adam Badawi, a law professor who specializes in corporate governance at the University of California, Berkeley. . For example, last year McCormick ordered a subsidiary of private equity firm Kohlberg & Co LLC to complete its $550 million purchase of DecoPac Holding Inc, which makes cake decorating products. She is a serious and sensible judge, concluded Adam Badawi.

McCormick’s April 2021 ruling in that case, available on the court’s website, centered on a specific performance clause in the purchase agreement, similar to the clause Twitter cites in its attempt to force Musk to finalize his $44 billion purchase. Marking a victory for deal certainty, this post-trial ruling resolves all issues in favor of the seller and orders the buyers to enter into the purchase agreement,” McCormick wrote in the ruling.

Buyers lost their appetite for the deal shortly after it was signed, as government entities placed stay-at-home orders across the country and weekly DecoPac sales fell precipitously…rather than deploying all “reasonable efforts to reach a definitive credit agreement, the buyers called their lawyer and began to consider ways to opt out of the agreement,” McCormick’s decision noted. Without input from DecoPac management, they prepared a draconian new forecast of DecoPac’s expected sales based on ill-informed (and largely unexplained) assumptions that were inconsistent with real-time sales data.

Social network officials want Musk to stick to the terms of the deal, which means they must work together to complete the acquisition or he must pay damages for wrecking the stock market. stock and reputation and pay the billion dollar penalty for backing out of the deal. But Musk says he wanted to close the deal quickly, but couldn’t after he suddenly realized bot spam was a huge problem on Twitter’s site and a major obstacle to future business prospects. .

Elon Musk has chosen to counterattack Twitter and is in turn filing a complaint against Twitter for not buying the company. One of the arguments put forward would be that Twitter lied about its number of redeemable users. Elon Musk’s lawsuit was filed hours after Chancellor Kathaleen McCormick of the Delaware Court of Chancery authorized a five-day trial beginning Oct. 17 to determine whether Musk can walk away from the deal.

When the market went down and the fixed-price deal became less attractive, Musk changed tack, suddenly demanding a “verification” that spam was not a serious issue on Twitter’s platform, and claiming that he urgently needed to conduct a “diligence” which he had expressly abandoned. Musk’s strategy is also a pattern of bad faith, Twitter said in its original complaint.

How do you read this situation?

Judge allows Twitter to fast-track its trial against Musk, for the first time representatives of Elon Musk and Twitter clash in court

Elon Musk files a complaint against Twitter for not having bought the company, one of the arguments advanced would be that Twitter lied about its number of redeemable users

1 thought on “The Twitter trial against Elon Musk will begin on October 17 and will last five days, Musk was accused of trying to postpone the trial date”