The Russian equipment recovered by the Ukrainian army on its soil reveals often faulty technology, sometimes tinkered equipment and the presence of Western parts despite the embargo. kyiv forces still recover and reuse these enemy weapons.

In kyiv, a specialized unit of the Ukrainian army takes care of arming the troops on the front with communication devices and drones. His work also consists of doing reverse engineering (or “reverse engineering”). She dismantles the enemy’s weapons in order to better understand their design and operation. Some Russian weapons can even then be reused by the Ukrainian army.

“There are drones, radio receivers for soldiers, laptops. All this material is intended for military use”, explains one of the members of this unit, Igor, questioned by the special envoy of the RTS Raphaël Grand for the program Tout un monde.

Volunteer engineers at the service of the troops

The material recovered on the ground is delivered to the barracks. [Raphaël Grand – RTS]The barracks, which is located in the center of the Ukrainian capital, brings together a unit of volunteer soldiers made up mainly of engineers. Some have studied abroad, with specialties in communication systems.

The last arrival is still packed in boxes. “There, these are drones that we use for intelligence. We have already sent our troops more than a thousand of these drones”, explains Igor. “And we equip them with night vision cameras. There’s millions of dollars worth of them here, I think.”

These are machines from the Chinese manufacturer DJI, the number one in the sector. Officially, however, the company no longer delivers to Russia and Ukraine. 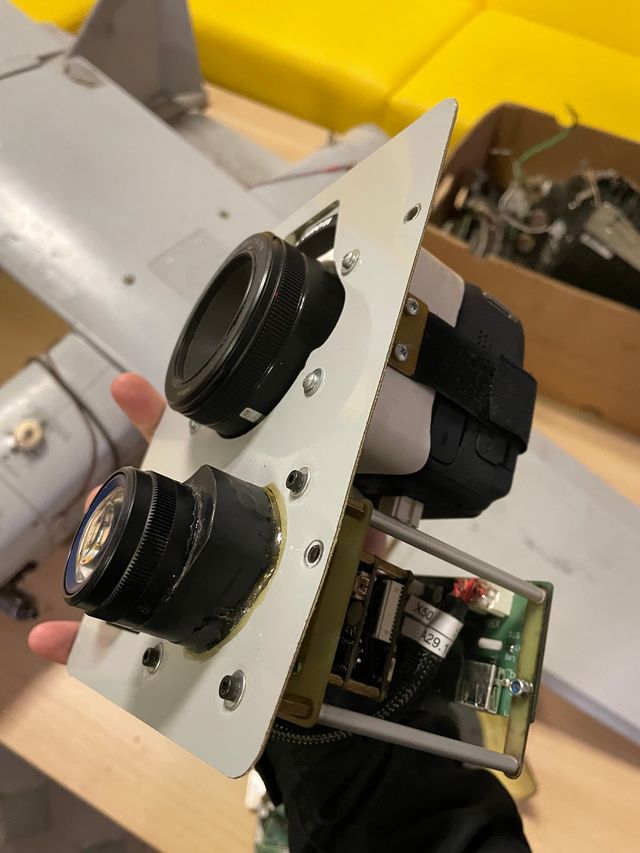 The camera for aerial photos. [Raphaël Grand – RTS]But perhaps the most interesting is in the basement of the barracks, where Igor and his team are deboning Russian equipment. This is the case of a drone shot down somewhere over kyiv.

“It’s a very nice machine. It’s the remains, after the crash,” he explains. “We’re trying to figure out exactly what parts were used to build this drone.”

The device is effective, the Russians often use it, but its design is of low quality. “Before we shot down this machine, we believed that it was equipped with the best cameras, the best technologies. This is not at all the case, we understand it now”, underlines the soldier.

A plastic bottle used as a reservoir

On paper, this model of Russian drone costs between 80,000 and 120,000 francs per unit. When disassembling it, we see that the device is assembled with adhesive tape. A simple plastic bottle serves as a reservoir, the housing of the camera intended for aerial photos is also of poor quality. The drone also had to fly at low altitude because of unsuitable optics, which exposed it to Ukrainian anti-aircraft systems.

“I think it’s because of the high level of corruption in Russia,” Igor said. “It’s supposed to be their best drone, but in fact money had to be embezzled and that’s what explains the poor quality of the components.”

Oligarchs concerned above all with getting rich

Corruption would therefore affect the level of armament of the Russian army, confirms Léo Péria-Peigné, researcher at the French Institute of International Relations (IFRI).

“It is indeed one of the reputations of Russian industry in general and a fortiori since the fall of the Wall”, he says. “Soviet industrial potential was divided among large oligarchs often more concerned with getting rich quickly than with supplying high-quality equipment.”

And this is a case that can be found several times in other areas of Russian armament, especially in the modernization of the fleet.

“There were similar cases where the Russian state paid a very large sum for an ambitious modernization”, notes this armament specialist. “But it turned out that once the modernization was paid for and theoretically completed, either it was essentially a facade, or it was incomplete, or it had been badly done because it was carried out by poorly paid and poorly qualified workers.” 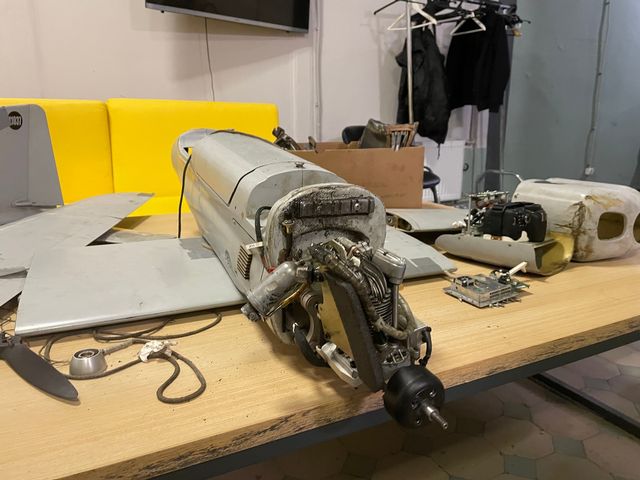 The dismantling of drones holds surprises. [Raphaël Grand – RTS]At the barracks in kyiv, another member of the special unit, Pavlov, shows how Russian weapons also have many Western parts.

“Already the plastic bottle inside is probably Coca-Cola. Ok, I’m kidding!”, he jokes. “But we know that the Russians don’t build the engines for these machines. They use parts from other countries.”

These are American or sometimes Chinese motors, purchased online at low cost. But pieces of very good quality are also found on the battlefields.

“We found European optical sighting systems in Russian tanks produced in 2016, after the first embargoes targeting military equipment in Russia”, assures his colleague Igor. “How is it possible that European companies are selling their product to Russia despite all the sanctions?” he asks.

Because the sighting device he is talking about is manufactured by the French company Thales, which recently told Le Parisien newspaper that it had delivered equipment to the Russian army until 2020.

Armaments remains above all a trade

“The world of armaments is above all a world of trade”, recalls Léo Péria-Peigné. “It’s a very political trade, but it is a trade.”

Western countries imposed an arms embargo on Russia after the annexation of Crimea in 2014. But “the answer that seems to have been given by the arms manufacturers was that they had been paid and that they had undertaken to provide certain systems before the embargo was imposed and that they were therefore contractually obliged to do so”, explains this specialist.

European, American, Chinese or even Russian, these pieces stored in the kyiv barracks will no doubt quickly return to the front line. Because in times of war, nothing is lost.

“The Russians certainly have better armament than us, but we try to be smarter,” notes Igor. “We repair this Russian equipment and we try to give it a second life by sending it to our soldiers.”